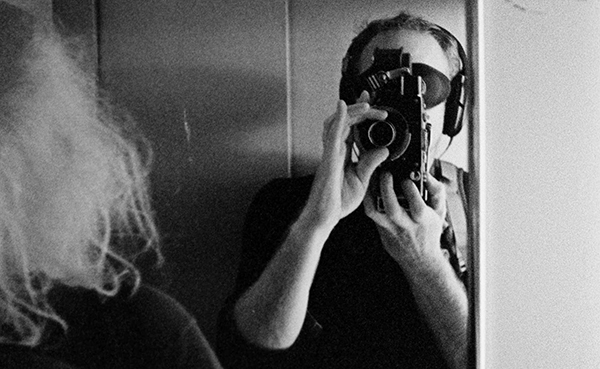 "Huw Wahl uses the form-giving, material qualities of moving image to unearth the importance of creative action and its transformative potential. Whether building a giant inflatable with volunteers, delving into the life of an anarchist philosopher, or developing an intimately materialist and political account of one person's poetry, it is the ability of film space to open experiences and ideas for communal change that drives him forward."
The Barn Arts

He has won several international awards with his films, and they've featured in magazines like Sight and Sound and The Wire, and received funding from organisations such as Arts Council England, The Henry Moore Foundation, and the Royal Photographic Society.

Wahl is currently working on an arts council funded film that explores the art of engineless sailing, and is a Research Associate at the University of Manchester on the AHRC funded project Creative Adaptive Solutions for Treescapes Of Rivers (CASTOR).

DIRECTED FILMS
20xx    Wind, Tide & Oar (in production)
A film concerning the absorbed attention & artistry of engineless sailing,
speaking to urgent contemporary issues of ecology, mental health, disappearing skills and heritage
20xx    Expiry Film (in slow production)
Working title / work in progress
2022    I AM A FILM (10m)
The poet Stephen Watts reads his Coda to The Liberated Film Club book
2020    The Republics (1h 23m)
A b&w 16mm film, drawn from the book ‘Republic Of Dogs / Republic Of Birds' by Stephen Watts
exploring landscape, history, memory and the power of words to celebrate and resist
2017    My Recoverist Family (40m)
A film about the non-linearity of recovery from substance use within the LGBT+ community
Co-directed with Amanda Ravetz
2016    Everything Lives: looking at the artist as father (24m)
A short 16mm film about my father
2016    Action Space (1h 26m)
Award winning experimental film and inflatable project about the radical 60s art group Action Space
2014    To Hell with Culture (55m)
A film about the poet, writer, art critic and anarchist, Sir Herbert Read
2012    Negotiating Representation: In Israel and Palestine (15m)
A photography and audio project about photographers working in Israel and Palestine

COMMISSIONS
20xx    CASTOR (in development)
A research film for Creative Adaptive Solutions for Treescapes Of Rivers
2022    ESK - nature (3m)
Music 'video' shot on Super 8 for hip-hop artist ESK
2021    In Time (17m)
Editor/cinematographer on a film made with children, directed by Amanda Ravetz
2021    Newham Heritage Month - Blue Mermaid voyage (4m)
A short film to document the voyage of the Thames sailing barge Blue Mermaid from Maldon to Newham
Carrying a token cargo of clay for brick making in East London
2020    Speaking Back (4x20m)
A series of films about artists in the Musgrave Kinley Outsider Art Collection at the Whitworth Art Gallery
2020    Betty Newman on Madge Gill(13m)
A Video edited for Newham Heritage Month, with Madge Gill's second cousin
Commissioned by Works by Madge Gill
2019    Up in the Attic (4m)
Trailer for upcoming production by Cross The Sky theatre company
2019    Michael Theis on Madge Gill (13)
Exhibition video about a close friendship with the artist Madge Gill
Commissioned by the William Morris Gallery
2017    Casebooks (9m)
A film based on an exhibition at Ambika P3, 16 March - 23 April 2017, London
Produced by Lauren Kassel
2016    Wonderland: the Art of Becoming Human (17m)
DOP and editor on award winning short film about AHRC funded, co-produced arts project
exploring the utopian impulses of recovery, in collaboration with Cristina Nunez and Amanda Ravetz
2015    MOSI exhibition videos (4m)
Videos for exhibition on food and eating - Commissioned by the Museum of Science and Industry
2015    The Wave (4m)
Filming performance of Jonathan Dove's The Wave, as part of Manchester Science Festival
Commissioned by the Museum of Science and Industry
2015    Castlefield Gallery Commission (10m)
Video documentation of artistic/academic conference at Federation House
2014    The Event of the Thread (13m)
Film documentation of a project by artist Hannah Leighton-Boyce
2013    Helpyourself Manchester (54m)
Co-director of a collectively made film about DIY music in Manchester in the early 2000s
2011    Liberty House
A film made in collaboration with residents of Liberty House
- accommodation for young people who find themselves homeless
2011    Mouths and meaning
Documentation of performance by Bronwyn Platten & Sarah Coggrave

CURATING
2021    The Becoming Earthly Film Season at The Barn Arts, Aberdeenshire
A 2 week online showcase of films, writing and talks on expanded notions of ecology in film